It is requested that all potential new practice members fill out the new practice member application form as completely as possible. It is also important to bring in a form of ID as well as any insurance cards that you would like to have a complementary benefits check run on.

The second step is to sit-down for a one-on-one consultation were you will be free to address any health concerns and goals that you may have, as well as addressing any past damages and traumas you may have endured that will help us address the cause of your health concerns.

A comprehensive chiropractic evaluation and Neurological Diagnostic Testing will be performed to further determine the exact cause of your health problems. Using our state-of-the-art diagnostic equipment to locate the root cause of any dysfunction or disease within your body.  Other orthopedic, neurological, and physical exams will be performed. New practice members can expect some minor twisting and turning when physically possible.

The Doctor will advise you if there are any necessary further examinations or X-Rays that will need to be taken based on initial exam findings.

A “Doctor’s Report of Findings” will be conducted where Dr. Bartlett will be able to show you the cause of your current health condition. He will then discuss with you if you are a good candidate for chiropractic care and all his findings and recommendations for your care, as well as action steps to reach your health goals.

Our next step is to get you started on your path back to health and healing the way God intended by providing you with the most specific, scientific, chiropractic adjustment around. 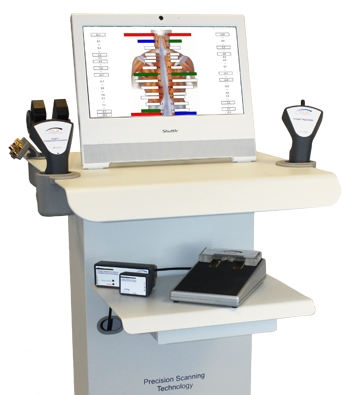 At ADIO, we believe that you deserve the best care possible, thus giving you the best opportunity to be healthy. That is why Dr. Bartlett provides this NASA certified technology to achieve the best assessment of your nervous system and how your body is functioning from the inside-out. This assessment tool is not only great for Dr. Bartlett’s assessment, it is also a fun tool to see and monitor the progress you are making and the healing you are achieving.

The Science Behind Thermography
The Thermal technology assesses autonomic nervous system function by measuring skin temperature differentials and has been in clinical use for over a century.  The first thermal patent for healthcare use was applied for in 1924, by Dossa Evins.  Later that year, B.J. Palmer started utilizing thermal technology to measure patients’ response to care.  Thermography has long been acknowledged in the scientific community as being an accurate and reproducible technology.  In fact, there are over 5000 references to thermography on Medline.  The normative study used by the Insight is based on published scientific research done at Johns Hopkins University in 1988, in which a group of neurosurgeons used thermal scanning technology to determine temperature asymmetry protocols and their relationship to sympathetic dysfunction.  In the abstract from the article, it states “Thermal values can be used as a standard in assessment of sympathetic nerve function, and the degree of asymmetry is a quantifiable indicator of dysfunction.”

The Science Behind Surface Electromyography (sEMG)
The Insight sEMG technology is similar to the technology used in EKG/heart rate measurement machines.  One primary difference is that the sensors are 1,000 times more sensitive, since the paraspinal muscles generate less action potential (electrical activity) than the heart muscle.  One of the most exciting technologies in contemporary chiropractic practice, sEMG measures baseline status and changes in the electrical activity of paraspinal muscles in order to quantify the muscular changes associated with vertebral subluxations.  This makes it a powerful tool for tracking outcome assessment results from chiropractic care.

NEW PATIENT PAPERWORKBOOK US TO SPEAK